Hiring neurodiverse developers can be challenging, particularly for smaller companies that are less experienced at hiring. This isn’t because you need an entirely new process or that neurodiverse people are inherently trickier to interview. It’s that small flaws in your hiring process get exacerbated. Obstacles that cause neurotypical people to stumble, become outright blockers to a neurodiverse person.

So we asked Matt Nigh, data engineering manager at UW Medicine, to give his tips on how to make sure your hiring process suits everybody.

“I think there are companies that other organizations could mimic,” Matt explained. “I would look at Google as one of probably the best that I’ve experienced.”-On the Dev Interrupted Podcast at 25:50

1. Interview processes should be conversational

If you use a lot of formal language, jargon and needlessly complicated words, you’ll make it much harder for your interviewee to understand what you want them to do. It also makes the interview artificial and cold, which can lead to unnecessary stress and anxiety in your interviewee. This is true for everybody, but for a neurodiverse developer, it can be much more potent.

“The most inclusive interview process I ever experienced was at Google,” Matt said. “And the reason I felt they had such an inclusive process is that it was wildly conversational. They were incredibly good at explaining what they were asking and what they were looking for. And to me, it was an incredibly friendly process.” -On the Dev Interrupted Podcast at 24:10

When giving instructions, particularly in practical tests, it’s important to make sure that you’re being clear and straightforward. Leaving ambiguity can cause problems, especially for neurodiverse developers. That ambiguity can distract away from the actual task at hand. The clearer your instructions, the better you’ll test a developer’s actual skills.

“I would say the reason I failed the system design interview was (and this is an example of what autism will do during an interview) it was the first system design interview I ever had. And I spent half the time trying to understand the language that the individual was using, rather than solving the problem, trying to make sure we’re just on the same page with what we were saying,” Matt said. -On the Dev Interrupted Podcast at 24:40

3. Neurodiverse developers need diverse recruiters, and stick around for longer once hired

Everyone has their own biases. While we should all strive to overcome those, it’s not always possible. The best way to avoid those problems is to make sure your interview team is diverse. Some coping mechanisms and strategies can seem strange to a neurotypical recruiter at first.

For example, someone with ADHD might ask you to repeat points or be typing as you speak. While it could initially look like they’re answering emails or not paying attention to you, it’s more likely that they’re taking notes to make sure they follow your instructions properly. The more diverse your recruiters, the fewer false assumptions you’ll make.

“Most recruiters are used to looking at neurotypical applicants, and they essentially have mental flags that come up with certain things, certain questions or anything like that,” Matt said. “Companies should ask: Do I have inclusive recruiters? So say, for example, at Google, they had incredibly inclusive recruiters. I was recruited by a deaf individual, for example. So this person very clearly understands me and anything that was going on.”-On the Dev Interrupted Podcast at 25:13

4. Neurodiverse developers could be more productive, and worth changing your processes

A program at Hewlett Packard Enterprise hired over 30 neurodiverse people in software testing roles at Australia’s Department of Human Services. The initial results from the program seem to suggest that those testing teams are 30% more productive than others, according to an article in the Harvard Business Review, called neurodiversity as a competitive advantage.

It would seem that, while a neurodiverse person might struggle in some areas—like the social anxiety brought on by an interview—they could exceed in others, such as pattern recognition.

If you’d like to hear more from Matt on neurodiversity in software development, you can watch the full podcast on our channel.

Fact: Over 26% of adults in the United States have some sort of disability. To ignore such a massive part of the population would be ill-advised for any company, legally, financially, and above all, ethically. How can you stay ahead of the curve when it comes to maintaining a progressive and responsive organization?

We reached out to two experts - Alwar Pillai and Perry Trinier of Fable – on the topic of designing products that have inclusivity for people with disabilities at their core. Here are the 3 things they think every engineer, developer and product designer needs to know about inclusive design and how it will inevitably affect the future of their companies.

1. Inclusive design has already brought us Alexa, Siri and countless other smart gadgets

Often times people assume that tech companies are driving innovation through focus groups or trying to cater to the average consumer, but that’s not always true. Some of the greatest recent innovations in tech have been found by designing technology to be as accessible as possible to people with disabilities. By keeping the designing process inclusive, you maximize potential for growth.

When you put inclusivity and accessibility at the front lines of your work culture and development process, you not only maximize your potential customer base but increase your pool of applicants and make your workforce more efficient. Some of the best talent in the world of inclusive design comes from people who use accessibility technology daily. Maximizing your accessibility to potential employees gives your company the best shot at finding the right person for the job. What does it mean today to build an accessibility first dev culture?

Perry Trinier: I think it's like sort of the opposite of saying that accessibility is an afterthought. In this case, accessibility is absolutely primary. And it's also like a shared understanding on the team that accessibility isn't an extra feature or like a defect that they can backlog. It's just a table stakes dimension of the quality of what they build, and that they kind of aren't finished building what they're doing if it's still inaccessible.

Alwar Pillai: There's a lot of barriers when it comes to trying to build an inclusive team, to just the workplace tools that are out there, you know?... And so we've had to do a lot of... custom workarounds for some things. But it has resulted in every single person in the team understanding the impact of accessibility and taking that extra initiative and make sure whatever they're sharing with... each other internally is easily accessible to everyone.

There seems to be a cultural divide when it comes to inclusivity and many companies are hesitant to make the necessary changes to fuel a more accessible work culture. Making the effort to enact real change is necessary for the health of your business and the respect of the individuals who need accessible technology. More and more individuals and companies are seeing the need to stay current with inclusive design or, better yet, lead the way to establishing new and exciting ways to stay inclusive.

Perry Trinier: I think it's important to invest in helping the team members to build the knowledge and specifically set goals for reports to, for example, complete a course in accessibility. It's an important skill, just like security and performance are for front-end developers. And it should be treated in that same way for professional development. And there are tons of resources online courses on LinkedIn, Udacity. And there are lots of blog posts and talks by experts in the community like Marcy Sutton, and they’re directed to developers, like front-end developers who just need to learn what they need to know to be able to test their interfaces and to build experiences that everyone can use, so I would say that's the place to start is just with building up that capability.

Design is changing… Moving towards a more inclusive future

There is a fundamental gap in what is provided and what is needed for many people who use accessibility technology. The way of the future is to practice an inclusive design culture and keep every person in mind in your design process.

Alwar Pillai: The way we build digital products right now is broken. There is a digital divide between the experiences of people with disabilities and people who are able bodied. And we as people who are part of engineering teams and engineering cultures, it's our responsibility to make sure we change the way we build products and make the process more inclusive, so that more and more people have access to the products that we're building.

If you want to know more about Fable and their ability to help your company evolve and grow while staying accessible to everyone, please visit www.makeitfable.com. Be sure to listen to and review this interview’s podcast and many others on Apple Podcasts, Spotify, Stitcher, YouTube or any of your favorite podcasting apps. Also, be sure to join the Dev Interrupted Discord community where we have conversations about topics just like this going all week long.

You're Invited to INTERACT on April 7th

1 day, 20 speakers, 1,000s of engineering leaders - all driven by the Dev Interrupted community. If you are a team lead, engineering manager, VP or CTO looking to improve your team, this is the conference for you! 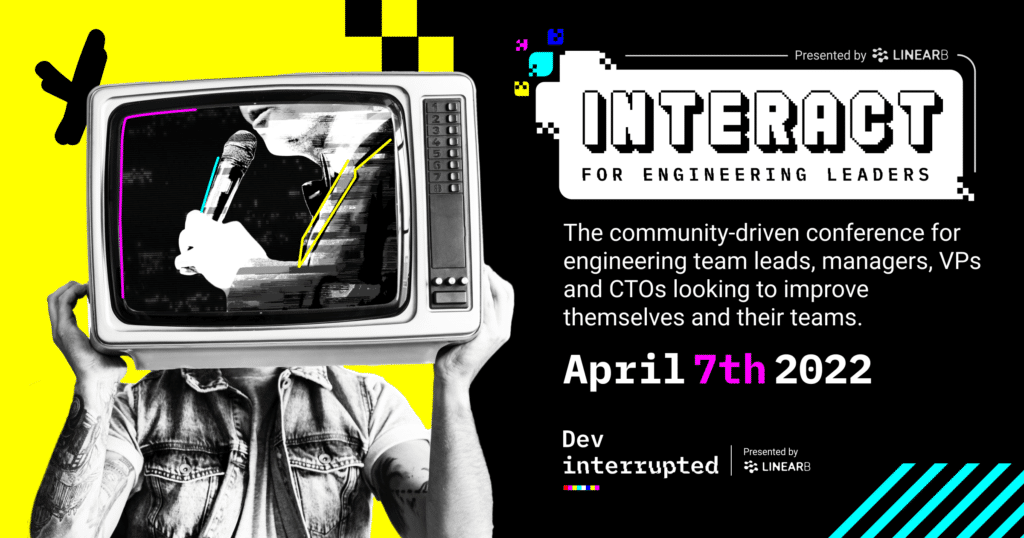